The narrative you are about to read describes tantalizing research and personal struggle undertaken to substantiate the marginalia on a Second World War map, and the details of which strongly suggests the answer to a near 80 year-old mystery. The stirring evidence is written on the bottom margin of a 1945 tactical military map and was, by chance, exposed to this author in 1994. The map shows a cryptic passage within what otherwise would be a routine wartime notation. The odd letter and number combination on the map is meaningless outside the context of aviation. When this notation is fully analyzed, coupled with archival information, and clarified by witnesses, it is the key to the world’s greatest aviation mystery. That mystery is the disappearance of Amelia Earhart and Frederick Noonan. They vanished on a flight around the world in July 1937, aboard a marvel of an aircraft called an “Electra” – a Lockheed Electra Model 10E.

Much has been written and exploited about this mystery – thousands of print articles, dozens of books, commentaries, documentaries and movies have been created. There are many websites that discuss the Earhart loss where suggestions, hearsay, conjecture and theories abound. All have failed to ascertain Earhart’s fate due to wishful assumptions and no tangible evidence. Well, almost all.

The Earhart Lockheed Electra Search Project (ELESP) has the tangible evidence that is needed to conclude – and when coupled with undeniable research and analysis – the Electra is in the jungle of New Britain Island, in what is now Papua New Guinea. While the theory about how the aircraft arrived in New Britain can be debated, the Electra is almost certainly there.

In the beginning: The Loss of Earhart, Noonan and the Electra

Amelia Earhart was born on July 24, 1897 in Atchison, Kansas. Amelia embarked on a flying career, which culminated in the possession of a Lockheed Electra Model 10E aircraft, which had been equipped for long distance flying.

Her attempt at a long distance flight around the world in 1937 is well documented, the flight ending on 3rd July 1937 with her disappearance. Amelia and her navigator Fred Noonan set out from Lae in New Guinea on the morning of July 2nd, 1937. They were last seen on the take-off from Lae at 10:00 am local time, 0000 Hours Greenwich Meantime (GMT). Their destination was Howland Island, a tiny speck of an island far out into the Pacific Ocean. Several radio calls were heard from the aircraft but it was never seen since that morning at Lae, according to most accounts of the disappearance. The aircraft did not arrive at Howland Island and the disappearance of the Lockheed Electra carrying Amelia Earhart and Fred Noonan is the most daunting mystery in aviation history.

Earhart’s world flight beginnings came in 1936 when Purdue University purchased the Lockheed Electra Model 10E for her, with the stated intention of using the aircraft as a “flying laboratory” but her real purpose was to set aviation records to enhance her fame. The Lockheed Model 10E Electra carried the Constructors Number 1055 – a unique number which could not be assigned to any other aircraft. It had the civilian registration identifier “NR16020” painted on the underside of the left hand (port) wing, the top surface of the right hand (starboard) wing and on the outer faces of the two vertical stabilizers (fins). The Electra was powered by two 600 Horsepower Pratt & Whitney R-1340 S3H1 engines. These engines were known as “Wasp” engines and could deliver 600 horsepower for take-off when using 100-octane fuel. The engines in 1937 were normally rated at 550 horsepower when using 87-octane aviation gasoline.

There were two attempts to fly around the world. In March 1937 for the first attempt, Earhart together with Paul Mantz, Harry Manning and Fred Noonan, set out from Oakland, California, on a southwesterly track, bound for the island of Oahu, Hawaii. The flight was a success and set a new record for the sector of 2400 statute miles – a similar distance for the last sector Earhart would ever experience. The Electra landed at Wheeler Field eight miles north of Honolulu, Oahu, after nearly sixteen hours of flying time. Earhart told the awaiting press when asked how much longer she could have flown if she had missed Oahu, “…I have over four hours of fuel remaining.” From this statement and from what was known of the fuel load for the next sector, one can deduce that the Electra, as operated by Earhart, used slightly less fuel than the consumption figures issued by the aircraft builder, Lockheed.

Because of a fuel contamination problem at Wheeler Field, the aircraft was flown the short distance to the combined Army and Navy airfield known as Luke Field on Ford Island, within Pearl Harbor. The Electra was refueled there using military-supplied fuel. Earhart began the next leg of the journey on 20 March 1937. The take-off ended in disaster. [20Mar1937_Electra_Accident_Report_Maxwell] The Electra was seen to slew around, collapsing the landing gear, and the aircraft dropped to the ground. The accident was what is called a classic aircraft “ground loop” that can occur during take-off or landing if the aircraft gets out of control. The accident severely damaged the Electra. Manning left the attempt there and then, returning to his normal profession as a maritime captain of ships. Noonan stayed on with the effort and Mantz remained on as an advisor. The damaged aircraft was disassembled and shipped back to the United States mainland, to the Lockheed Aircraft Factory in Burbank in California, where it had been built the previous year.

From what we can see in the photographs, the aircraft had been extensively damaged. During the repair in Burbank, one new starboard wing outer panel was fitted. One new engine mount was supplied for the right hand position (No.2 engine) and the left hand mount for No.1 engine, although damaged, was probably repaired where it had been manufactured in Los Angeles. The engines were removed for examination as the propellers had struck the ground while the engines were at high power. New propeller blades were also supplied. Much sheet metal work was needed on the aircraft. It was a complex repair process and took 4-to-5 weeks to complete.

In May 1937, the Electra was ready and Amelia Earhart and Fred Noonan set out again, but this time the world flight attempt was to be carried out from west to east due to climatic changes anticipated in mid-year. The Electra departed Los Angeles, bound for Miami on May 21st.

Both now experienced flyers, Earhart and Noonan set out across America and departed the continental United States from Miami. They flew to South America, crossed the Atlantic Ocean and arrived in Africa. The Sahara Desert was crossed, then the Indian sub-continent, the Thai Archipelago, Singapore, the Dutch East Indies (now Indonesia), Darwin in Australia, and finally New Guinea, arriving at Lae in one month. They had not had much rest in this condensed journey and a two-day layover in Lae was planned. Their arrival back in the United States mainland was to be at Oakland and was timed for Independence Day, July 4th.

They were delayed in Lae beyond the original two days rest, as Noonan was required to set his chronometer, which was essential for the astronavigation for which the flight depended. Noonan was to locate and calculate their position on the earth during flight by the sighting of particular stars, from which calculations would deliver a position on the globe within a ten-mile diameter circle. A positional “fix” such as this would be done at set intervals so that the speed of the aircraft over the ground could be calculated (in this case the speed over the sea). Such a series of fixes would inform the crew of the aircraft progression and allow them to adjust or correct their steered magnetic course and calculate their estimated arrival time at Howland Island, and then compare this to their previously planned flight regime. With over half of the 2556 statute miles of the flight being carried out during hours of darkness, the navigation of the flight was the key to the success of the enterprise on this, the longest over water flight contemplated by Earhart. The Electra carrying Earhart and Noonan, left Lae on July 2nd, 1937.   As will be revealed, the Electra was not seen again until 17 April 1945 when an Australian Army patrol stumbled upon the aluminum wreck. 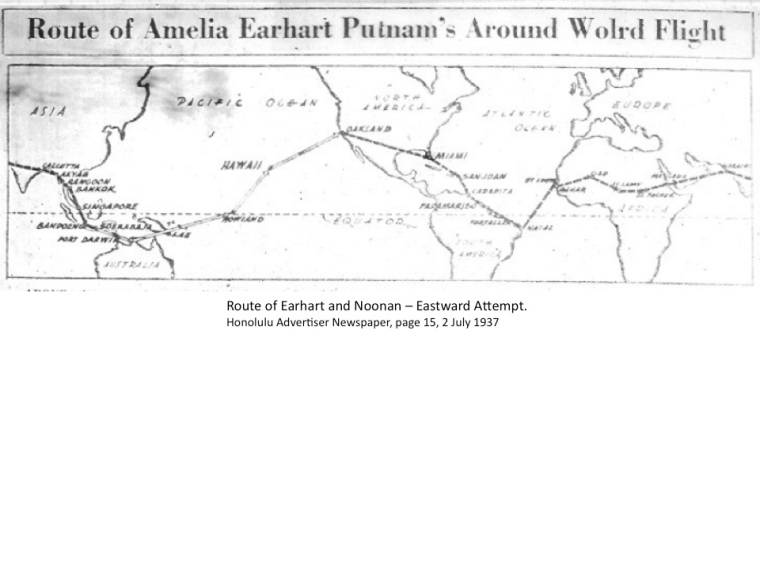 Part 7 – Howland area to New Britain – To the Gilberts…

Part 9 – Not Seen, But Not Forgotten