Of all the various theories and searches regarding the disappearance of Amelia Earhart, Fred Noonan, and their Lockheed Electra, only one endeavor has the tangible documentary evidence and eyewitness accounts to buttress the conclusion to their final resting place – the jungle floor in Papua New Guinea. In 1945, an Australian infantry unit discovered an unpainted all-metal twin-engine aircraft wreck in the jungle of East New Britain Island, in what was then called New Guinea.

The Australian infantry patrol was unsure of their actual position in the jungle and were on site for only a few minutes. Before they left the site they retrieved a metal tag hanging by wire on an engine mount. The Australians reported their find and turned in the tag upon return to base. The tag has yet to be recovered from the maze of Australian and American archives, but the letters and numbers etched upon it were transcribed to a wartime map. The map, used by the same Australian unit, was rediscovered in the early 1990’s and revealed a notation “C/N 1055” and two other distinctive identifiers of Amelia Earhart’s Lockheed Electra Model 10E.

On 2 July 1937, while en route to Howland Island from Lae, New Guinea, pilot Amelia Earhart and her navigator Fred Noonan disappeared shortly before they were to arrive at Howland Island – up to 2,600 miles and 20 hours after take-off. They were flying a modified Electra aircraft built specifically for the around-the-world journey. Had they arrived at Howland Island, their next stop would have been Hawaii, and finally California. A flight around the world would have been the first by a woman pilot. They undoubtedly encountered headwinds on the flight. The widely accepted last radio voice message from her was “…we are running on line north and south…” manually recorded 20 hours and 14 minutes after take-off by a United States Coast Guard ship at Howland.

This theory holds that Earhart and Noonan, after flying some 19 hours should have “arrived” close to Howland, but after an hour of fruitless searching for the island, Amelia invoked the Contingency Plan she had made and turned back for the Gilbert Islands. While there were no known usable runways between Lae and Howland except for Rabaul, there was at least the opportunity to ditch the aircraft near or crash-land on the numerous inhabited islands in the Gilberts along the way if needed, and there was more than sufficient range to reach Ocean or Nauru Islands. Earhart carefully husbanded the engines to extract the maximum range from the remaining fuel. The aircraft had an advertised range of some 4,000 miles in calm air; there should have been plenty of fuel to retreat to the Gilberts at a minimum. Among the myriad of alleged radio calls from Earhart after her last confirmed message were four radio calls heard by the radio operator on Nauru Island…one call was heard just under two hours from her “final” transmission, and some 10 hours later, three more final calls on the pre-selected frequency were heard by the Nauru radioman. The Nauru radio operator was one of only a few radio operators who had reliably monitored Earhart on her outbound leg to Howland – he knew the sound of her voice over the radio. In any event, her aircraft has been projected to have run out of fuel some 50 miles south of Rabaul, New Britain Island, and then crashed into the jungle. 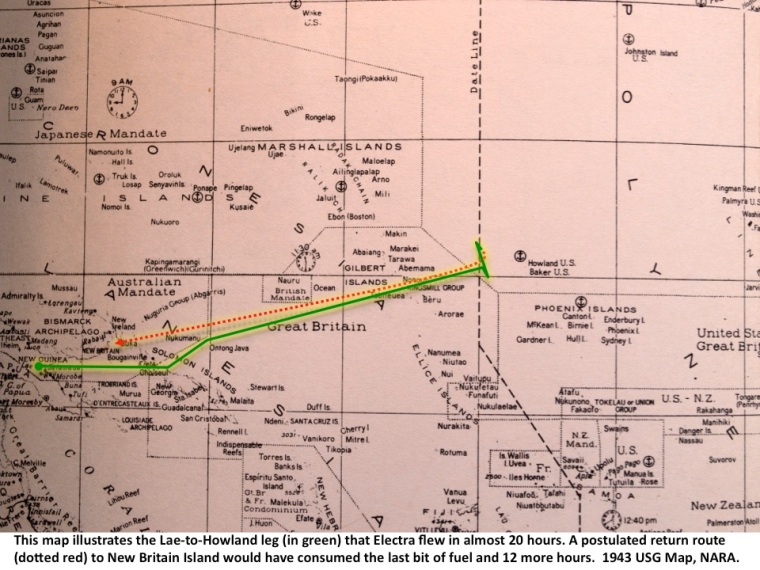 David Billings, a now retired aircraft engineering professional, has been analyzing the flight and searching for Earhart’s Electra for more than 20 years in the jungle of East New Britain. Dense jungle, harsh terrain, poor maps, imprecise archival information, personal resource limitations, and possible natural or manmade burial of the wreckage, have thwarted success. He has led many expeditions into the search area, and has refined his analysis to the likely wreck site using terrain mobility studies, geospatial analysis of aerial and satellite images, custom-built maps, and re-analyzed archival maps and documents. As an example, the Australian-held wartime map is authentic, and the handwriting reflects unmistakable discreet data points and little known references of military operations in 1945 East New Britain.

The longtime map holder, the Second World War Infantry Unit clerk, Len Willoughby, retrieved the map from a map case on a pile of discarded equipment in 1945, and kept the map until he mailed it to former-Corporal Don Angwin in 1993 (and who revealed it to Mr. Billings in 1994). Neither of these former infantrymen had the motive nor “insider” expertise to create or introduce details concerning the Electra’s obscure component identification or situational nuances. The string of numbers and letters, “600H/P. S3H/1 C/N1055,” remains the most significant historical notation found to date in the search for Earhart’s aircraft. This alpha-numeric sequence almost certainly mirrors the details on the metal tag recovered from the engine mount by one of the Australian soldiers on 17 April 1945. This three-group sequence translates to 600 Horsepower, Pratt & Whitney R-1340-S3H1, airframe Construction Number 1055. This airframe construction number IS Amelia Earhart’s Lockheed 10E Electra aircraft, and the engine type exactly matches as well. The eyewitness visual descriptions from three of the Australian veterans at the scene also strongly support this supposition. The date on the map, 24 May 1945, refers to the return answer to the Australians from the American Army, who did not believe it was “one of theirs.” 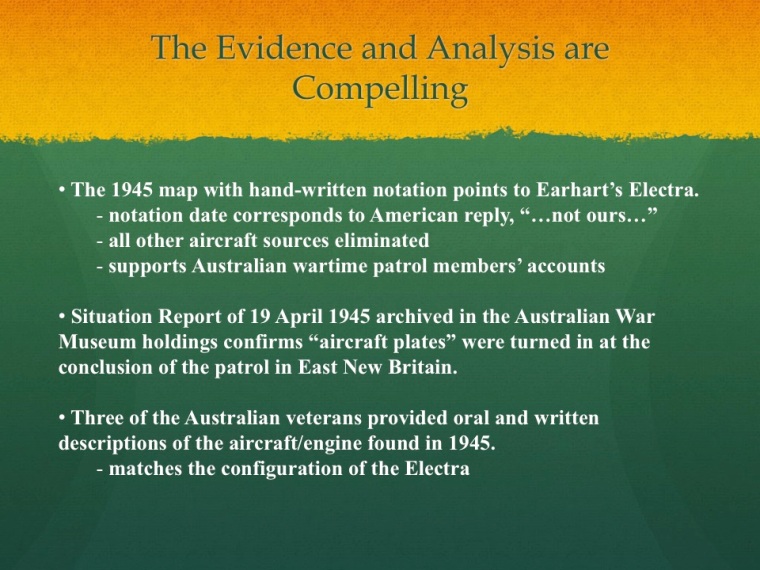 Now that it is lookin like a CV Vaccine will be available and dispensed in time, and providing that the PNG Airline schedules gear up, David Billings is planning his next foray into East New Britain in 2022, the 85th anniversary of Earhart’s disappearance.

New satellite maps, a possible LiDAR survey and more time on site will help in the search.

The search costs thus far have been borne primarily by David with some help from America, from team members and private donations, all of which has been expended on previous expeditions. Some funding will go a long way to assist in providing the answer…

“After much thought and new analysis of what we do know, a change of tactics is called for and a new search area has been selected. The area now selected was seen to have an area of “loose bare earth” in 1996 but not considered to be of importance as at that time, we were looking for an aircraft wreck on the surface.

The search area is quite remote and every expedition to this area costs a great deal.

Now retired, I need some financial assistance to be able to continue this very interesting project. We have good evidence but need adequate funding. All donations will be thankfully received and acknowledged.”

Part 7 – Howland area to New Britain – To the Gilberts…

Part 9 – Not Seen, But Not Forgotten

I would like to express my greatest thanks to the men of the 11th Australian Infantry Battalion – specifically Don Angwin, Ken Backhouse, Keith Nurse, Roy Walsh and Len Willoughby.

Google Earth:  The Google Earth application has been of enormous assistance with this project in East New Britain by the project being able to look down on the search area for one, and within the project the ability to ascertain distances and locations for points of the Earhart story has been exceedingly helpful.

The Australian War Memorial contains valuable information concerning the efforts of the particular patrol  that found wreckage but also the information contained in the records offers a surrounding view of the events in New Britain at that time of crisis during World War Two.  The AWM records provided invaluable assistance.

The International Group for Historical Aircraft Recovery (TIGHAR), the organisation based in the U.S. that has carried out research over the years into the disappearance of the Electra and her two crew members.  TIGHAR documentation, and the ascertaining of pertinent facts from within the research contained on the TIGHAR site, is acknowledged.